Ettan snus was created by Jacob Fredrik Ljunglöf in the year 1822 and is today the oldest snus on the market. Ettan snus was revolutionizing when it was created, but the ingreadients were simple - tobacco, salt and water. 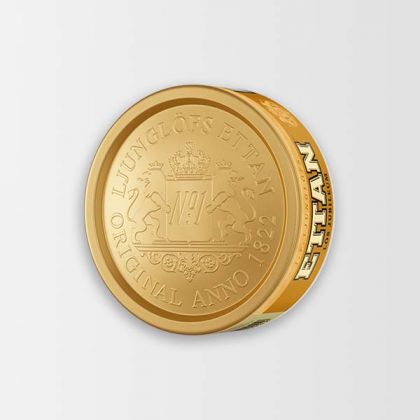 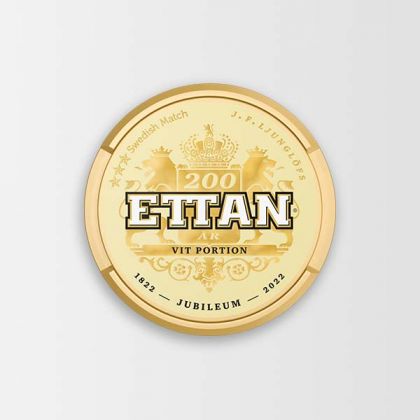 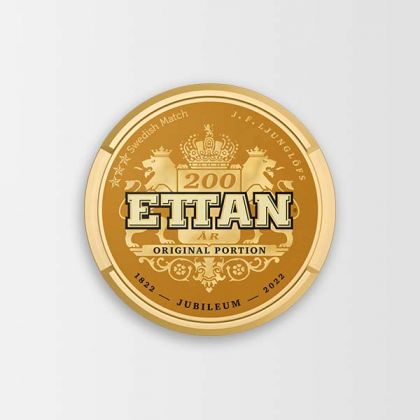 per page
The range currently includes three products - Ettan Loose, Ettan Original Portion and Ettan White Portion. The brand is a Swedish snus tradition and there are still an great number of people who say that this is the absolute best snus.


Ettan loose has tasted exactly the same since it was created in the year 1822. A lot has changed since, but not the taste of Ettan snus. Here, the classic tobacco taste is slightly milder than in many comparable snus varieties. This makes the smoky aromas glow through and is perceived more clearly. Here you can also find tones of dried grass, tar, malt, and a small hint of dark chocolate. One portion of Ettan Snus contains a lot of taste and gives you a long snus experience.

The range from Ettan Snus is simple, the taste is the same and you have three different formats to choose from choose between. There is a loose snus, an original portion and a white portion. Regardless of the format you appreciate, you can enjoy the taste of Ettan Snus, it's not more complicated than that. You do not have to choose between different flavors and aromas, or varying sizes of the portions, here it's just a decision needed before you can click home a can with Ettan Snus.

The range here at SnusMe


If Ettan snus is not for you we have a wide variety of different brands and flavors in our range here at SnusMe. With loose snus and portion snus you will find brands like Röda Lacket, Shiro, Siberia, Catch, Chainsaw, Odens, Offroad, Granit, Grov, Göteborgs Prima Fint, Göteborgs Rapé, Jakobssons, Kaliber, Kapten, Knox, Kronan, Kurbits, LD and General G.3. We also have a wide range of nicotine pouches for you who wants to use snus completely tobacco free. In our range you will find nicotine pouches from Nordic Spirit, Loop and Lyft and more.

Why is it called Ettan Snus?


It was in 1821 that Jacob Fredrik Ljunglöf was recruited as head of Lundgren-Anderssonska tobacco factory. The tobacco factory dates from the 17th century and was then located on Drottninggatan in Stockholm. The following year, he developed the recipe for Ettan Snus and put his own name on the product together with No.1, the designation for the finest quality. At that time the designation No.2 was also used. Jacob Fredrik Ljunglöf basically managed to do the general quality stamp to his own. Ljunglöf No.1 became in every day speech Ettan and has stuck ever since.

The history behind Ettan Snus


When Jacob Fredrik Ljunglöf started working at Lundgren-Anderssonska tobacco factory he considered that the manufacturing methods of the time were too slow. Then snus was manufactured by fermenting for up to six months. Together with a chemist, Ljunglöf developed a new manufacturing method and began to pasteurize the snus. They used only tobacco, salt, water and potassium carbonate, so-called potash.

Now a batch of snus could be completed in a week instead of six months. In addition to the new method, shelf life was improved and made the snus stay fresh longer. This was how Ettan Snus came about, the very first modern snus. This was long before the snus can had been invented, and the snus was instead delivered in cardboard boxes. Ettan Snus was incredible popular, and with its pure tobacco flavor, it spread all over the country. It could be said that Ettan Snus is the archetype of Swedish snus.

The son Knut Ljunglöf takes over


Jacob Fredrik Ljunglöf died in 1860 and was then one of Sweden's richest men. The innovative production method and recipe behind Ettan Snus had built his fortune. At that time, it was his son Knut Ljunglöf who ran the snus factory, even more successful than his father.

Knut Ljunglöf was obsessed with the quality of snus. The story goes he got one silver bowl every morning with fresh snus placed on his desk. With a spoon he put an odor test in each nostril and then sniffed in its handkerchief. In this way he determined the degree of humidity in snus and the quality of tobacco. If the test was passed, the snus was packed and sold, but it was not approved, the entire batch was discarded. The information is taken from the Swedish book The snus king: Ljunglöfs Ettan and the Swedish snus. There you can read more about the story behind Ettan Snus.


Loose snus looks the same today as it did 200 years ago and is the basis of the Swedish snus tradition. Based on loose snus, several different products have since been developed in the snus industry. It was in the 1970s snus began to be packaged in small portion bags, what is today the original portion. There, a new era of snus began.


The fact that the snus was packed in portion bags was something that was appreciated by many. Instead of having to shape a "prilla" with your fingers and risk spillage and smudges, you could now open yours can, pick up a finished portion and place it directly under the lip. It was the year 1990 that the Ettan Snus brand launched its snus in portion bags, which was named Ettan Original Portion.


16 years later, it was time for Ettan Snus to launch the next product, Ettan White Portion which came on the market in 2006. Unlike the original portion, the white portion do not undergo the so-called post-humidification. White portion consists of moist tobacco but is dry surface. The advantage is that these do not drip as much. The downside is the taste and nicotine takes a little longer to excrete, but on the other hand, both the taste and the nicotine experience is smoother compared to the original portion.

Ettan Snus portions are in size large, the most common size that is sometimes also called normal. A pouch with Ettan Original Portion contains 1 gram of snus and has a nicotine level of 8.5 mg/g. A pouch with Ettan White Portion has a weight per portion of 0.9 grams, and the nicotine level is 8 mg/g. If you appreciate the taste of traditional snus you should really try Ettan Snus, they live after all with the motto “Swedish snus tradition since 1822 ”.