Before Tre Ankare arrived, all snus was loose - you had to bake the snus yourself. Baking your own snus is an art, but for those who were not familiar with the snus world, it was considered a rather messy thing.

Therefore, in 1973, the product developers at Swedish Match created a snus flavored with whiskey, which came in pouches that were not much different than tea bags. These small snus bags were then packaged in a small plastic bag. This product failed and the brand was withdrawn from the market. However, surveys showed that many people had been positive about the new way of snusing, but were not particularly impressed by the bags themselves. This made Swedish Match develop the idea further and in 1977 a breakthrough was made. This breakthrough became Tre Ankare - the first portion snus on the market which is the foundation of all other portion snus that they sell today.

Today, Tre Ankare are only available as White Portion, but the taste is similar to the one found in the first original. A strong snus, with a strong tobacco character and a hint of smokiness.
Shop By
Shopping Options
Filter:
Brand
Format
Strength
Type 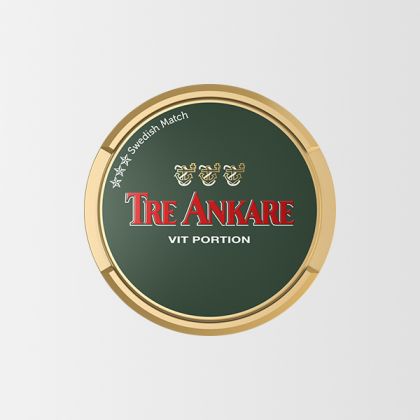